I’ve been annoyingly cryptic (sit down in the cheap seats with your cries of ‘generally just annoying!’ 😉) over the last 6 months or so. I’ve alluded to ‘things;’ vague references to #fighting the good fight# and such but effectively been gagged from further explanation. Until now.

Today after almost 6 months of hell at the hands of our local authority, we are victorious. But it is a hollow victory, tinged with indescribable sadness and pain.

In August 2018 we were presented with a hand delivered letter from the manager of the Looked After children’s social care team (LAC) informing us they intended to pursue us legally for parental responsibility over our autistic 15 year old son.

I cannot begin to adequately describe the horror and pain we felt, as well as the sheer disbelief, on reading the allegations laid out in the Public Law Outline (PLO) document hand delivered that day in August.

And how did such events arise? Because we had dared to question, disagree and eventually file a formal complaint about the stance taken by our then allocated social worker and the part time foster care placement of our autistic son. That in a nutshell is the extent of our ‘crime.’

They LA brought a case against us stating we had caused emotional abuse, neglect and rejection, by placing the needs of our other children over and above our son’s. and because we had continued to seek and challenge them in providing an alternative, and most importantly, APPROPRIATE care placement. 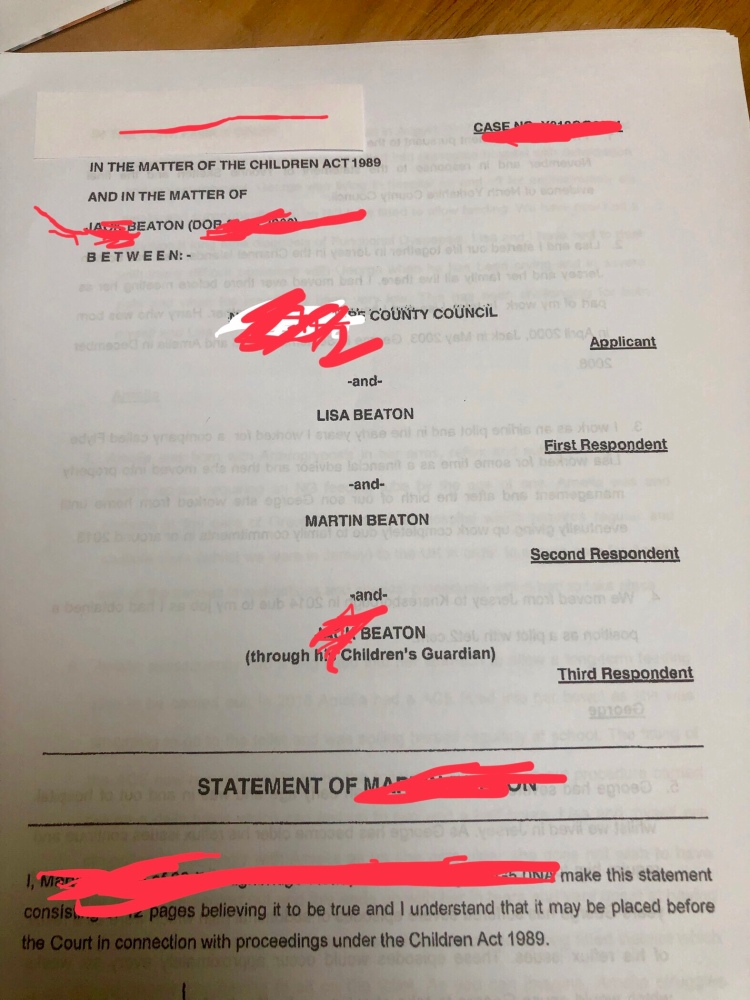 And whilst we are relieved in the extreme, there’s a pervading emptiness, an anti-climactic ‘that’s that then’ feeling.

After the lies and damning claims we’ve had to endure reading submitted by the LA, the hours I’ve spent pouring over documents, the hard-won social care records, endless meetings with lawyers and providing evidential based-responses and testimony, today the Local Authority got to stand up in court and say “actually we withdraw, there’s no case to answer.” No sorry, no oops we got it wrong and no acknowledgement of the anguish or distress this caused us. It hurts. A lot.

It is no comfort (at the moment) that our barrister says this is the best outcome we could have hoped for; that by instructing the Judge that there is no case, she allowed the application to be withdrawn. He explained the fact they did not withdraw prior to today meant they had to save face and thus we still had to appear in front of the Judge for her to formally dismiss the proceedings …. apparently….but it doesn’t feel like we’ve been cleared. Had our chance to challenge why they brought such an erroneous case.

I think I’ve been too hooked on tv court dramas with all the vim and vigour (vinegar as far as my feelings go!) and the fire and brimstone revealing that #justice# has been done.

I suppose we wanted retribution but it’s not in the redress of this particular court to address the, for want of a better word, ‘suffering’ we have experienced. Of course there will be some legal bod out there who would happily pursue a case on our behalf (💷💷💷 kerching) but that will cost us funds we don’t have and for what purpose? Will it bring about closure? Will it heal our grievances? I guess we will never know. And I worry there will be always be those people who assume the “no smoke without fire” philosophy thus believing we are indeed at least partially at fault.

Those of you who have followed my blog/know us personally, will be aware that we have 4 children. All with extra needs and/or health conditions.

For the last 3 years we have been in dispute with our local authority about the most appropriate way of meeting the needs of our high-functioning autistic son.

It was agreed after multiple interventions by varying services, trialing ever more desperate adaptations to “fix” things in mainstream schooling and yet on-going repetitive, risk-taking behaviours, that our autistic son needed an education health care plan (EHCP) and specialist educational placement.

Our son was also requesting respite from the family home. He struggles when his needs cannot be met, with the hubbub and ‘chaos’ that manifests within our busy family and with the unpredictable nature of our other children’s health needs.

So we sought to address not only his academic needs but his social, emotional and mental health needs. Additionally we wanted an emphasis on building and imparting important life skills in order to secure the ability to support himself in living an independent (or to the best of his abilities) life in the future.

I’m extremely lucky to have Mr DNTW’s total support and 100% commitment in aiding (& abetting?!) family life but juggling this alongside him working shifts with long, unsociable hours and for whom weekends off are as mythical as rocking horse poop, ostensibly (attempting) meeting the families day to day needs stand – or fall – on my shoulders.

Let me be clear, this is not an attempt in any way to curry admiration or pity on my part. It is just a fact.

Most children thrive with a routine – the reassurance of predictable, timely, boring regularity. It is generally recognised this is even more preferable for autistic individuals.

Certainly in our son’s case sudden upheaval, changes to arrangements or fixed plans being altered are at best unsettling, at the very worst, a cause of deep anxiety leading to potentially risky, life-threatening behaviours.

We don’t have family to rely on locally and whilst we are ever grateful to the small groups of friends we have made locally, many of them have their own children, some also with complex needs; they are not in a position to assist in helping out or medically qualified to do so.

Arguably H being over 18 doesn’t qualify as a child in the eyes of the law; nonetheless as I’m sure the majority of parents would testify, once your offspring reach a legal age of independence, it doesn’t mean you cease to parent…or care…. or worry…. sorry H you are stuck with me mithering you about what time you are coming home or if you are in for dinner! I promise to stop once you leave home “for good.” Probably.

Since H has a congenital heart condition which we know is progressive, albeit *should* be manageable with medication and surgery in later years, it adds an extra dimension to parental fretting. He doesn’t want a fuss making (in fact, I will probably be lambasted for even mentioning it here) so we try our best to abide by that and know that he is in good hands medically, as well as being cognisant of the importance of maintaining and being attuned to his physical well-being. Less so after a Saturday night’s shenanigans…. 🍻🥃🍷

In respect of our younger 2 children, their needs are much more complicated and unpredictable to manage, both by virtue of their ages and the nature of their difficulties. Suffice to say, life is not so neatly parcelled up with a cherry on the top.

I’ll spare you all the intricacies (if you want to know more, I’ve covered this in other blogs) but on grounds of costs being incompatible with public expenditure we were refused a placement for our son at an autism specific residential school which on a Monday-Friday basis.

By this point, both ourselves and our son were desperate. And exhausted and demoralised.

We needed a complete turn about from the impossibly, destructive situation we seemed perpetually quagmired in and we engaged legal representation in order to proceed to an educational tribunal.

This cost us hugely. I do not mean just financially. I had a complete mental health break-down and spent 3 months as an in-patient. To this day I take a cocktail of medications so I can “function’ and continue to receive therapeutic community care.

The fall out on our other children was immense and still impacts them in a variety of ways. Mr DNTW’s too.

With him having to hold down a job and be soul parent, he called in favours left, right and centre to see to the care needs and day-to-day cover for our children. We could not afford for him to take unpaid leave.

Indeed my psychologist refused to allow me to leave hospital until social care had provided a medium to long term plan to accommodate our son.

Whilst it nearly broke our hearts to proceed as outlined, we hoped that by way of the courts we would eventually secure an appropriate residential school placement which would negate the need for a foster placement.

Even during those darkest of days the response from social services was how soon can we return your son home? They simply weren’t interested in the wider needs of us all and in working

I will never forget reading an article that described how parents of children with autism show similar levels of stress to that experienced by combat soldiers. I wish I could recall it to link to!

We had anticipated time apart would paradoxically strengthen the bonds between us (absence makes the heart grow fonder and all that) by giving us the time and space to mentally recharge our batteries as it were. Whilst he is loved unconditionally, autism is a complex disability to navigate and parent without some ‘down’time,

So we dared to ask for help from our local authority under the guise of children’s social care. We admitted we couldn’t do it on our own.

Instead of being lauded for our honesty, recognised that we were doing the best job we possibly could under difficult circumstances, we were left for an unreasonable length of time floundering and having to negotiate an appeals system to try and secure our son a residential school placement.