I’ve noticed a theme in many of my blog posts – the titles often spring to mind based around music.

Although I’m not quite sharing the lyrical prose, more precisely the sentiment behind Shakespear’s line: “if music be the food of love, play on!” I think it’s apt that music evokes so many thoughts, memories, emotions (good & bad) nostalgia for the past, excitement for the future (nothing better than THE song of the summer fueling the count down to an epic, sun-drenched, sun tan lotion coconut wafting, possibly cocktail inspiring yearning).

For those of you who are mere whipper snappers, Shiny Happy People was brought to us by R.E.M. (Have a google, promise it’s worth it) Apparently released in 1991 (now I feel REALLY old) the video even now brings back memories & the halcyon days of having learned to drive, gaining the first tastes of freedom as my parents allowed me to stay out at parties providing they knew where it was, if there was a responsible adult there etc) & the realision that I was on the cusp of adulthood, (although A-levels were less fun)  In my present frame of mind how over-rated THAT adult bit turned out to be…. but it would be wrong to be all doom & gloom & as a rule of thumb, I think those who know me fairly well would have, up until this recent blip (understatement extraordinaire) have considered me generally an optimistic, enthusiastic, life embracing & vibrant (not necessarily alcohol induced on the last part – stop rolling your eyes at me! 🙄) person.

Since I entered the hospital (spa) i’ve many time been asked about the Lisa of old by staff and inmates. What was I like before I crumbled? What did I do with time & to describe my qualities good and bad.

I think the person I used to be tried her best, be that whipping up cakes, volunteering for various jobs/school activities/charity work, getting Minx’s request for 10 different shades of nail polish on each set of hands/feet PERFECT, trying to interject exactly the right amount of enthusiasm & salient nodding to G-man’s newly created mind craft world number attempt 24598645 and basically, feeding/clothing & generally keeping on top of things as  best I could on the home/medications/therapies & ENDLESS meetings and appointments front. Any day we made it through with minimal maiming/moaning and a modicum of decorum, applied equally to kids, spouse or the fur babies was a day to be if not exactly celebrated, vaunted as a win won.

Most of all, I’d like to think I was a friend to many. One that could be confided in, counted upon; secret keeper, confidant, being around through the highs & the lows – proffering the cake & prosecco as needed.

I hope I have been a decent enough mother/wife/daughter/sister/auntie etc & been there for those in need be that family or friend.

I recall the old Lisa being terribly nervous but honoured to stand up & speak to a roomful of strangers at the Rare disease conference https://definitelynotthewaltons.com/2016/01/15/put-on-your-red-shoes/ and   https://definitelynotthewaltons.com/2016/01/20/d-day-red-shoes-part-2/to a room full of geneticists, high powered medical bods & patients & families about my family experience of raising an undiagnosed child.

I attended workshops, coffee mornings, presentations & felt confidant enough in a subject that I was passionate about to make my voice be heard and counted.

But that Lisa isn’t me, at least not now & doesn’t feel like it ever will be again. (Don’t you just love a pessimist?! 😳)

Group workshops and therapy have tried to convince me she’s still somewhere there, buried under some rubble, a bit dusty, rumpled & crumpled but nothing that a quick febreeze and a dollop of self belief won’t sort out; however at this very moment, the disconnected, discombobulated partial person I am seems far removed from the one of old.

So that leads me on to my next party piece favourite, with a slight play on words; “if you’re happy and you know it…. take your meds.” Meds are my friend right now. I *may* have alluded to this once or twice (ahem) in the last 2 blog posts and I am quite certain there will be many readers out there shuddering at my cavalier attitude to essentially keeping the pharmaceutical industry in filthy lucre. But a valuable lesson I have learned in these darker days is that whatever gets you through is whatever you must do.

The Doctors and nursing staff keep a careful and watchful eye on what you take as stated by the consultant and what is written up for PRN (as needed) and if you start getting a bit trigger happy on the prn front, they are not going to dish them out like smarties and are very keen that you try distraction therapies, chatting things over with your designated care-coordinator or even something as simple as a hot drink, walk in the gardens before willingly handing over the gooood drugs.

It is fair to say they leave you a little floaty, present but not quite there, comprehending of your surroundings & those of your fellow inmates but all the edges are softened, flattened & much less likely to leave me blubbering pathetically and hoping I’ve rammed enough tissues in my pockets before having to resort to wiping my nose surreptitiously on my sleeve (eewww).

Today has necessitated plenty of tissues, prn & if I could pull it off pop star sun glasses worn at ALL times inside and out plus multiple avoidance, floor gazing & a pretense I’ve gone slightly deaf.

Unbelievably, my 28 day (spa) hospital stay is coming to an end this Wednesday and despite feeling far from ready, able or even slightly like I can cope, the health insurance have not agreed to continue paying for care.

Apparently after 28 days, I’ve had my lot & should be back to my usual, sparkly self. (Must make a note of that, can be my new daily personal mantra)

My consultant did her level best to persuade them I am far from ready, she argued for day patient therapy & that was met with a resounding no. They even tried to secure me on-going therapy as an out patient since this should be covered under a separate claim area but apparently “the computer says no.”

Since costs in a facility like this are in excess of £3000 per week, we are not in a position to stump up the moola for a continuing stay.

Apparently the kids still need all their vital organs & my liver/kidneys will be more likely preserved in a prosecco/formalyhyde combo – pre admission obvs… haven’t touched a drop in here & even for the few days prior to admission – in fact still not entirely convinced that my significant jitter/tremor commented on during early sessions wasn’t down to prosecco withdrawal symptoms…. NB – entirely joking; despite my reputation as the lush of FB, I’m generally a one glass a night type girl and for clarification purposes, I mean a small, glass not one that can fit an entire bottle!! So purely on a practical front I can’t ebay anything off…

So what now? Well the consultant has asked for the crisis team from the NHS local team to review me urgently tomorrow & try & find me a bed in the local NHS hospital.

The thought of having to go through this all again with new staff, therapists, teams etc is exhausting beyond belief & I’d be lying if I said I wasn’t terrified. But my bigger fear is that there won’t be local bed space & I will be shipped off to Scarborough or such like; being this is more than an hour away from the family home & the logistics of trying to retain & build up some kind of relationship with my kids, puppy, not to mention hubby, this is untenable as an option to me. So I will be left with the only option to return to the family home.

Do I feel ready? Hell no. Do I feel I can “cope?” Not even slightly. Do I still have as my end game the “plan” that put me in here in the first place as my intention? Without a shadow of a doubt. So back to the selfish, weak, feeble, ridiculousness  & all the other things I loath about myself it is then…

Meanwhile tonight I will cuddle G/man’s teddy that he gave me for support that bit harder & hope the combo of anti anxiety/depression & sleep meds I took will kick in asap…. 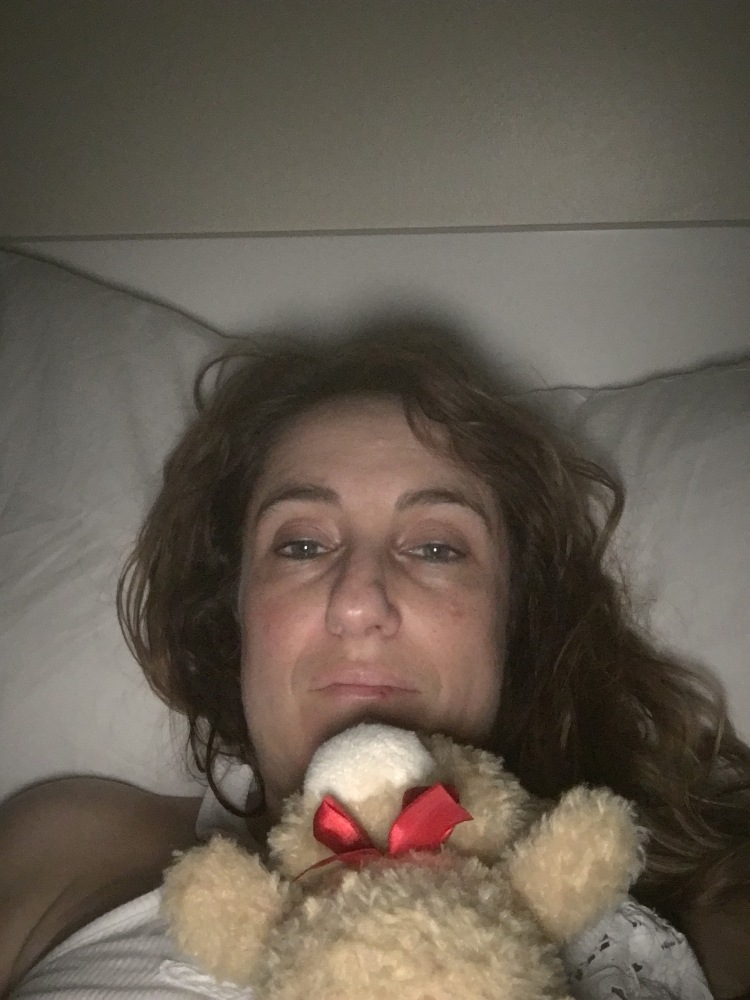